In recent years, more and more banks, both newcomers and established covered bond issuers, have opted for “semi-benchmark” covered bonds. We provide an overview of this emerging market segment and look at which issuers from which countries are using this format, what the drivers behind this development are and what regulatory differences exist. Last but not least, we provide an outlook on the future development of this format.

2. banks in new and smaller markets made use of covered bonds as a funding tool and, in mature markets, more and more banks with smaller cover pools started to issue covered bonds.

According to our definition, next to size, the covered bond must be publically placed, while we do not distinguish between pot or retention deals, auctions or club deals. However, we do not include retained deals. These are bonds that are issued to be used, for example, as ECB collateral. Thus, we generally do not include sole-lead issues which we consider not to be placed publically or which are not actively traded. Hence, we are applying rules similar to those of index providers but less restrictive (e.g. regarding the number of bookrunners). Deals with an initial volume below EUR 250mn that have been tapped to reach the semi-benchmark size have been excluded; hence, only “Day-1” semi-benchmark deals are viewed as semi-benchmark bonds. Our last, but rather standard criterion is the coupon type: we counted only fixed coupon bonds (however, we are aware that there are a number of bonds with floating interest rates, especially in local currencies other than the euro). We analyzed foreign currency bonds separately, applying the same criteria as for euro-denominated semi-benchmark covered bonds.

GERMAN BANKS MAKE THE MOST USE OF SEMI-BENCHMARK COVERED BONDS

In the following, we always refer to the initial issue size, unless otherwise stated. We thus only take into account the initial volume issued and ignore taps of semi-benchmark deals. In the past 15 years, German issuers have made the most use of semi-benchmark transactions. In total, there have been 53 semi-benchmark covered bonds from Germany, with total market volume of EUR 13.5bn or 55% of the semi-benchmark segment. The country with the second-highest amount and number of deals is France (eight deals amounting to EUR 3bn), followed by Finland (eleven deals adding up to EUR 2.9bn) and Austria (eight deals totaling EUR 2.35bn). In total, we considered 91 bonds.

The semi-benchmark segment exists in ten countries with a total of 41 issuers. Here, too, Germany is in the lead: in Germany there are 18 issuers, followed by Austria and France with six issuers each and Finland with four issuers.* 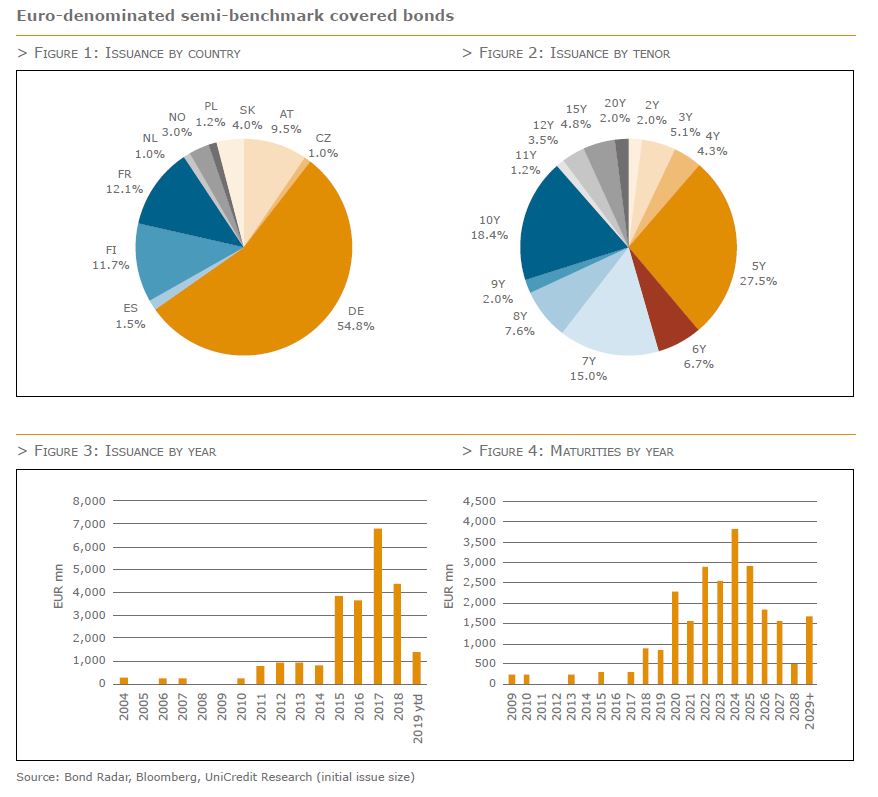 There are several reasons for the increasing number of semi-benchmark covered bonds issued in recent years. We highlight the most important drivers when comparing them to:

In the past decade, the focus on asset/liability management has increased. Mismatches between assets and liabilities increase refinancing risks and thus e.g. overcollateralisation requirements of rating agencies. A granular liability structure enables the issuer to optimise asset/liability management. This structure is of course issuer-specific and depends on, among other things, the size of the cover pool, the type of collateral (e.g. granular residential mortgages versus large-scale commercial mortgages), the number of outstanding covered bonds, the type of covered bonds (benchmark, private placements, registered covered bonds), and the maturity structure. One way to optimise asset/liability management is the use of semi-benchmark covered bonds. This enables issuers to efficiently place smaller-sized bonds (compared to Jumbo benchmark bonds) to a broader investor base (compared to private placements), a relatively balanced approach. Thus, the maturity structure can be modelled more evenly. Our thoughts on this subject assume that there is a certain limitation to an issuer’s volume of covered bond collateral and therefore there is a need to make efficient use of that collateral.

The Delegated Regulation 2015/61 on the Liquidity Coverage Requirement (LCR) is probably the most important regulatory topic when thinking about semi-benchmark covered bonds and it is also a key point determining the definition of the lower limit of EUR 250mn for the segment. With a size of at least EUR 250mn, covered bonds from EEA issuers are potentially eligible for LCR Level 2. With a rating of at least A-/A3 (credit quality step 2), semi-benchmark covered bonds can be Level 2a, and with a rating below A- or unrated, semi-benchmark covered bonds can be Level 2b (provided the cover assets fulfil the eligibility criteria). Covered bonds issued by non-EEA credit institutions are eligible for Level 2a, regardless of the issue size, but they need to be rated at least AA-/Aa3 (credit quality step 1). Depending on the issue size, the cover pool needs to meet an asset coverage requirement of at least 2% (for issues ≥ EUR 500mn) or 7% (for issues < EUR 500mn).

> CBPP3: Eligible. In order to qualify for purchase under the CBPP3 (currently reinvestment phase), covered bonds must meet several criteria, but the outstanding volume of a bond is not relevant in this context. Accordingly, semi-benchmark covered bonds are generally eligible for CBPP3 purchases.

In the covered bond universe, Markit iBoxx indices are the most commonly used and broadest spread index family with country-specific sub-indices as well as sub-indices for different tenors. iBoxx indices are therefore often used as benchmarks for ETFs. As many investors and their portfolios are – in one way or the other – linked to benchmarks, benchmark eligibility is an important criterion. However, the issue size required (among other criteria) to be included in one of the iBoxx Covered Bond indices is at least EUR 500mn, which means semi-benchmark covered bonds are not eligible for iBoxx indices. This is currently a clear disadvantage for semi-benchmark covered bonds.

Looking at the development of the benchmark definition in recent years, the size required for a bond to be deemed benchmark was significantly lowered in 2012. Up until the end of 2011, the required benchmark size was EUR 1bn. During the financial crisis, the placement of large-sized bonds became more difficult and the execution risk of placing these bonds increased significantly. In addition, rating agencies put a stronger focus on a balanced asset/liability profile. As a consequence, more and more smaller covered bonds were issued. Finally, the benchmark requirement was lowered to EUR 500mn. While there is currently no further reduction of the threshold planned, one should not rule this out in the long run.

The investor base for semi-benchmark covered bonds is somewhat smaller than for larger bonds. Given that some investors prefer large-size covered bonds, i.e. at least EUR 500mn, the lower the bond size, the lower the number of investors. These investors include, for example, central banks (especially outside Europe) and large fund managers. In addition, the credit work of investors needed to invest in bonds from smaller issuers with smaller bond volumes might be an obstacle. This is partially mitigated in markets where there is a deep and granular domestic investor base, for example in Germany.

Semi-benchmark covered bonds are sometimes used to complement funding structures. For example,funding needs in non-domestic currencies can arise if an issuer has commercial real estate assets in a country outside the euro area and funds these assets in the same currency (e.g. a German bank issuing in Swedish krona or sterling). Another example is when issuers want to broaden their investor base and specifically issue bonds in the local currency of the investor, e.g. in Norwegian krona or Swiss franc. For figures 12 and 13, we applied the following assumptions: covered bonds issued in currencies other than the euro and the respective domestic currency, semi-benchmark size in euro-equivalent at the time of issuance and bonds with a fixed coupon. The data shows that German and French banks have made use of semi-benchmark covered bonds in non-euro currencies relatively often. It also shows that the peak of 2005 and 2006, just before the financial crisis, has not been reached again. Since 2010 issuers have regularly issued semi-benchmark covered bonds in various currencies but relatively infrequently. The currencies used most often are Swiss francs (mostly used by French and German banks), followed by USD (most often used by German banks) and sterling (also most often used by German banks).

Semi-benchmark covered bonds have been increasingly used in the past decade for various reasons. They can be used to optimise an issuer’s asset/liability management – either to smoothen the maturity profile or to get funding in foreign currencies, and they provide an adequate format for issuers with smaller cover pools in order to place their bonds to an international investor base. This applies for banks in both, new as well as established covered bond jurisdictions. With covered bonds in the CEE region gaining momentum, the number of semi-benchmark bonds is likely to increase going forward. This will offer further opportunities for investors to diversify their investments and will eventually improve the liquidity of the asset class.