Sweden experienced a quite severe banking crisis in the early 1990s, with substantial drops in house prices. However, since the recovery from the crisis, we have seen a steady increase in household indebtedness and continuously rising house prices.

Over the last five or six years the debate about households’ indebtedness and mortgage credit has been intense and measures have been taken. And after a very long journey – the first initiative from the Swedish Financial Supervisory Authority, FSA, was at the end of 2014 – an amortisation requirement is now on its way to being introduced. The government will introduce a law on the 1st of May this year that makes it possible for the FSA (the authority that is responsible for macro prudential policy in Sweden) to implement an amortisation requirement that will enter into force on the 1st of June 2016. 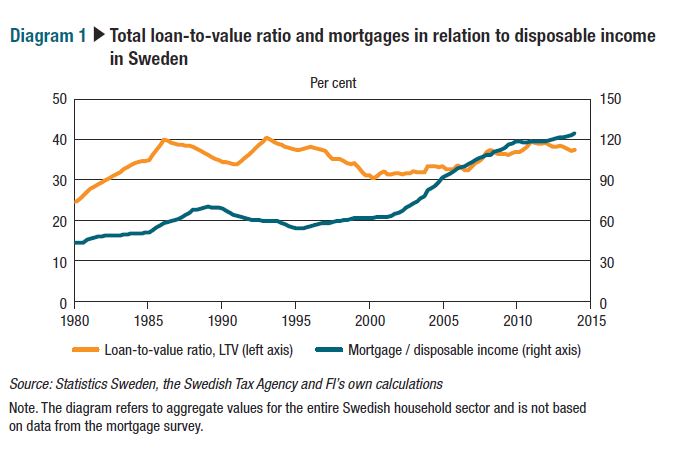 The Swedish Bankers’ Association and its members welcome the proposed amortisation requirements and believe that it is well balanced on a general basis. The proposed requirement will only include new mortgages and will necessitate higher amortisation for households with higher loan-to-value (LTV) ratios. The Swedish Bankers’ Association, together with the banks, have worked hard during the last five years to improve the amortisation culture. This work has proven successful and today an amortisation behaviour that is very close to the upcoming requirement has been established. Therefore, the transition to the requirement will probably be relatively smooth. 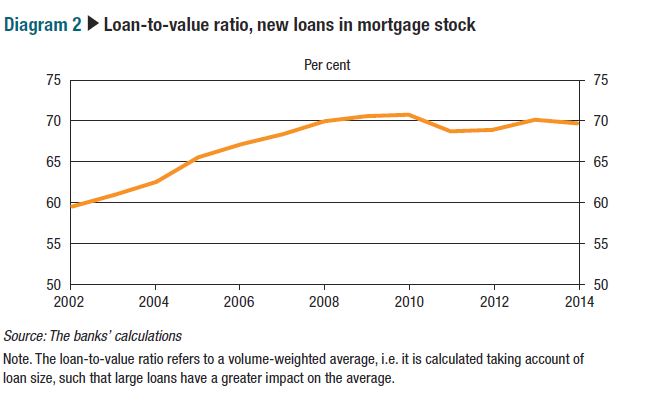 Sweden experienced a very deep banking crisis in the early 1990s and had a few years of recession. During this period of three to four years, house prices fell in real terms up to 30% and, in some regions, it took up to eight years for them to return to the same price level as before the crisis. Many households experienced a very tough time. In the years before the crisis, in the 1980s, credit markets had been deregulated and mortgage lending had increased. During and after the crisis the growth rate in mortgage lending was low and, as mentioned, house prices were fell and only recovered slowly.

In the late 1990s and early 2000s, house prices increased and mortgage lending took off. The increase in the growth rate of mortgage lending went up by double-digit numbers on an annual basis. The Swedish housing market didn’t see a downturn during the last financial crisis, whilst most other countries in Europe did; rather, there was more a dent in the curve. The same is true for the mortgage market. We have not seen a dip in lending to households as has been the case for most other countries in Europe, although the growth rate did decrease from the really high rates seen, but has once again started to increase. After the crisis in the early 1990s and up until today, credit losses stemming from mortgages have been very low. The forecasts from the Swedish authorities are that this trend will continue and that there will be very low credit losses from mortgages into the future.

What has happened though is that the volume of new housing construction has remained very low since the crisis in the 1990s. This, combined with other constraints in the Swedish housing market (especially the ill-functioning rental market), has led to supply side shortages in the market. At the same time, the demand side has continued to grow. This combined with, for example, the exceptionally low and steadily decreasing interest rates during the period from 1995 to now, has led to increased house prices. Also, during this period floating interest rates and interest only loans became more and more common. This combination led to a situation with high LTVs and very low amortisation for households.

There have been several measures or tools implemented to dampen the increase in household indebtedness in Sweden whilst the debate has been ongoing. Both Swedish authorities and international organisations highlight the Swedish mortgage market as a major risk for Swedish macro-economic development.

The FSA introduced an LTV-cap in 2010 which states that households need at least 15% in capital investment, or, put the other way around, you are only allowed to borrow up to 85% of the value of the home with the home as security (there is a possibility to use unsecured lending above 85%). Around the same time, in early 2011, the Swedish Bankers’ Association issued a recommendation regarding amortisation – that new mortgages should be amortised down to 75% of the market value of the home. This was later modified (at the beginning of 2014) to 70% in 10-15 years and, at the same time, the Association introduced individual amortisation plans for all households that took out a new mortgage (the initial draft came from the FSA, but it needed legal support to implement it).

Beyond this, the FSA has increased risk weights for mortgages for banks using internal models. First, up to 15% (motivated by future credit losses) and then, later, up to 25% (motivated by macro prudential concerns). The four largest Swedish banks also have a 5% systemic risk buffer and the counter cyclical capital buffer will soon be introduced at 2%.

The Swedish Bankers’ Association had its own recommendation for amortisation and planned to make it even stricter – amortisation of new mortgages down to an LTV of 50%. But, the Competition Authority argued that this could be anticompetitive (although it did not make a full investigation). The Association therefore withdrew its proposed new recommendation and also the existing one, in late 2014. After this, there were no rules regarding amortisation and the Swedish authorities and international organisations pushed for measures to be taken to stabilise the housing market. In the absence of any political decisions to make the housing market function more efficiently, focus turned to the FSA and an amortisation requirement. When the recommendation was in place, between 2011 until late 2014, amortisation behaviour strengthened dramatically. Today, amortisation behaviour is close to the upcoming requirement, especially for households with high LTVs (above 70%). 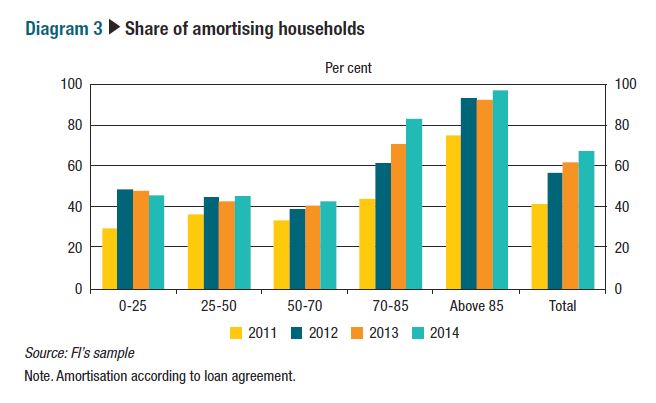 In early 2015, the FSA published its first proposal for a future amortisation requirement as a macro prudential tool. Nonetheless, the FSA encountered some legal issues regarding what was in its mandate as a macro prudential authority. As a result, it had to withdraw its proposal in April 2015 and then the government had to deal with the issue of how to implement an amortisation requirement and what mandate the FSA should have. It proposed, later in 2015, to introduce, or change, the legislation in a way that gives the FSA the mandate to introduce a requirement. This updated law will enter into force on the 1st of May 2016. The FSA has circulated its second proposal for an upcoming amortisation requirement and it is planning to introduce the requirement from the 1st of June 2016. This gives the banks and their customers little time to prepare and implement the new rules. Households which sign up for a new mortgage with an LTV above 70% will amortise 2% of the loan and households with an LTV between 50-70% will amortise 1%. The proposal also states that the market value can only be used or updated every five years. This makes the regulation rather difficult, both for banks and for households. It would have been easier, and still with almost the same utility, to use market value.

Therefore, two years after the removal of the Bankers’ Association recommendation there will “most likely” be an amortisation requirement in place in Sweden from the 1st of June 2016. The introduction of the requirement will probably not be that dramatic because most households taking out a new loan already amortise, almost, up to the incoming requirement. If that is the case, the effect on household indebtedness will be rather small. The discussion of further measures, such as debt-to-income ratios or debt-service-to-income ratios, will continue. However, the measures to make a difference to the housing market in the long run are owned by the politicians – changes in the tax system to increase mobility, increased building etc. We have seen house prices level out during recent months, but the growth rate in lending is still high. The debate regarding the housing market and household indebtedness remains ongoing, and more measures or tools may come in the future.