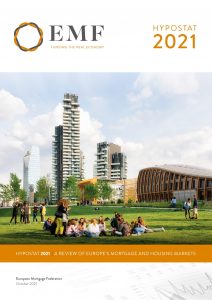 The EMF-ECBC is pleased to present the 2021 edition of the Hypostat, the EMF-ECBC’s flagship statistical report encompassing data on recent developments in housing and mortgage markets in Europe and beyond.

If you are interested in receiving the underlying statistical database in Excel of Hypostat 2021 thank you for sending an email to info@hypo.org.

Access the interactive version of the EMF Hypostat 2021 by clicking on the image below or download the PDF version using the buttom above.

Besides the country specific data, key facts revealed by Hypostat 2021 include the following:

increased in 2020 by 4.8%, down from a 5.8% growth rate in 2019. This continued an upward trend that began in 2014, but the pace of growth peaked in 2018, as reported in the previous edition of this report. Between 2011 and 2020, house prices increased at very different rates in the majority of the Hypostat sample, yet some southern European countries diverge from this latter trend.

a key indicator of housing supply, decreased by 5% year-on-year in 2020 in EU. A majority of jurisdictions reported a decreasing number of permits, although there are noticeable exceptions to this, which points to a somewhat diverse landscape for construction prospects in Europe. New building permits represented 0.74% of the combined EU27 and UK building stock, 0.04 pps less than in 2019, and clearly below the 2000-2007 1% average.

fell slightly more rapidly in 2020, as the average rate reached 2.11%, 26 bps lower than in 2019. In the meantime, variable interest rate mortgages represented just under 20% of the total stock, continuing the ten-year-long declining trend which started in 2010, when the proportion was over 60%.   If you are interested in receiving the underlying statistical database in Excel of Hypostat 2021 thank you for sending an email to info@hypo.org.