The specialised Danish mortgage banks ensure a robust, stable and cheap source of financing. The Danish mortgage financing system is thus of great importance for the competitiveness of companies and, hence for growth and welfare. During the latest financial crisis the mortgage banks were able to issue and sell covered bonds to fund loans to customers on a current basis, and the system contributes as such to the overall financial stability in the Danish economy. For investors, the covered bonds issued from the specialised Danish mortgage banks are very attractive due to the inherent security, high liquidity and the high rating of the bonds.

“The Danish mortgage financing system is of great importance for the competitiveness of companies and, hence for growth and welfare.”

DLR Kredit A/S (DLR) has, in spite of a loan portfolio of DKK bn. 132.5 at end 2015, merely a market share of 5.2 % of the total lending from the specialised Danish mortgage banks. However, lending to owner-occupied homes is not amongst DLR’s primary lending areas as these instead comprise agricultural and urban trade properties. If we consider DLR’s primary business areas alone, i.e. agriculture, office and business premises, private rental housing properties and private cooperative housing properties, the average market share is 15.2 %.

DLR is primarily owned by 63 local and regional (shareholding) banks that at the same time are cooperation partners responsible for distributing DLR’s loans, while the loan handling and the credit work is centralised and carried out by DLR. DLR’s loan portfolio is diversified as regards geography and number of customers, and a significant two-thirds share of DLR’s loan portfolio is concentrated in the agricultural sector. Geographically, DLR’s lending is spread across Denmark, as the loan-providing banks have between them an extensive network of branches spread throughout the country. DLR also has limited lending in Greenland and the Faroe Islands.

The specialised mortgage banks in general strongly support the financing of small and medium-sized enterprises (SME’s) in Denmark. DLR’s ownership structure and, thus, the geographically widespread lending likewise provides solid support to this, illustrated by the fact that almost 40% or DKK 52 billion of DLR’s total loan portfolio is lending to SME’s, cf. CRR art. 501. 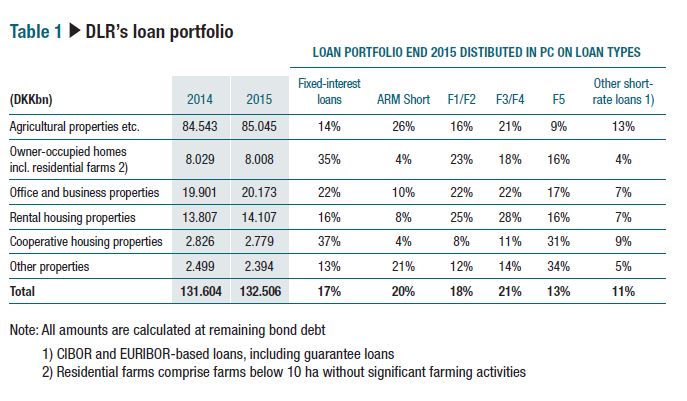 As for DLR, the ownership structure and the inherent cooperation agreement also implies that DLR’s losses and credit risk have been further reduced by means of loan loss guarantees provided by the local as well as the regional loan-providing banks. At the end of 2015, 93% of DLR’s total loan portfolio was comprised by guarantees. In addition, a small part of the portfolio of around DKK 0.5 bn. was covered by a government guarantee. Furthermore, DLR has the possibility of offsetting losses on loans provided by the individual banks in the aggregate commission payments to the individual banks for putting up the guarantees.

On the whole, the guarantee and the loan loss offsetting schemes mean that DLR’s risk of loss on lending can be characterised as manageable and relatively (very) limited. In addition to this, agricultural land is a scanty factor in Denmark and because of the accompanying fundamental demand there is always a floor under the price of land mitigating the risk of losses, which was also the case during the recent financial crisis. 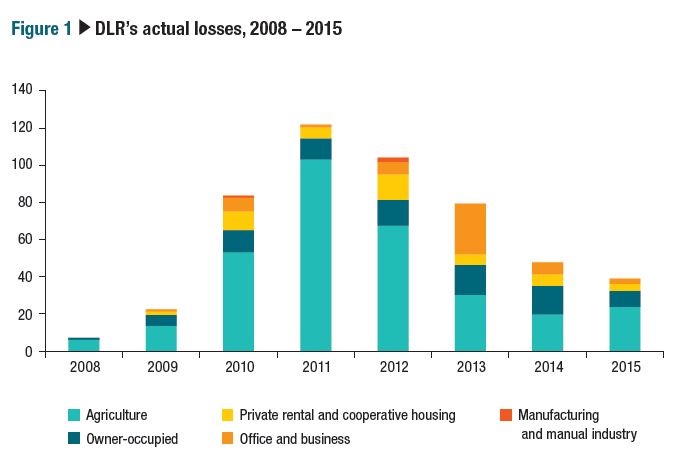 The ownership structure and the inherent cooperation agreement makes it possible for DLR to fund the loans by issuing covered bonds at competitive prices due to, i.e. liquidity, credit quality enhancement and the detailed and restrictive Danish legislation. The price on the specific covered bonds sold to investors to fund a loan is, according to DLRs use of the specific (strict) balance principle, cf. Danish mortgage credit legislation, transferred directly to the borrower as the interest rate on the specific loan.

European Legislation and Harmonisation – Challenging for the Specialised Danish System

The specialised Danish mortgage credit system is challenged by both the recently implemented European legislation on capital adequacy and liquidity measures as well as possible outcomes of the ongoing work on further harmonising the definition of covered bonds in Europe.

It is of utmost importance that the specialised Danish mortgage banks are not being squeezed out due to legislative efforts which primarily are focused on a universal banking landscape and on different types of legislative set-up’s for covered bonds in other European countries.

DLR is the Danish evidence that smaller banks – through common ownership – can get access to competitive, stable and cheap funding of loans against security in real property via a specialised mortgage bank. And this not at least for the purpose of lending to SME’s.

In light of this, European regulatory initiatives and harmonisation efforts must not compromise the smooth functioning of the specialised Danish mortgage credit system, including DLR, which as a specialised mortgage bank, is a primary source of funding for agriculture as well as for urban trade properties in Denmark.