Housing finance can make the difference

The housing finance sector can be deployed to improve the energy efficiency of Europe’s legacy housing stock and help bring about an enormous cut in greenhouse gas emissions, whilst bolstering economic recovery.

The housing sector is crucial to developing a clear market roadmap that will allow the European Union meet its goal of cutting greenhouse gas emissions. Indeed, housing is a strategic sector, not just because homes are the main place where people spend their lives and, increasingly, work from, but also because it accounts for 40% of carbon emissions in continental Europe.

Improving the energy efficiency of the housing stock is therefore going to be a really important component of the Fit for 55 package that was unveiled by the European Commission in July 2021. Fit for 55 legally enshrines the EU’s plan to cut greenhouse gas emissions by 55% from 1990 levels by 2030 and to reduce them to net zero by 2050.

The aviation sector accounts for 3-4% of global greenhouse emissions so, to put that in context, we’d need to make around 210 plane trips per year to equal the emissions produced by a single-family house. This demonstrates that improving the energy efficiency of the housing stock has to be an absolutely critical component of the European Commission’s strategy to cut emissions.

There’s also another really important aspect to this. The home is a very special place where people spend a lot of time. This makes it an ideal focal point to begin educating consumers to become a little greener in the decisions they make.

This exercise should not be considered as “just” a philanthropic decision taken by already environmentally conscious people who also tend to be more affluent, but it will be a win-win solution especially for those households for whom it is more difficult to make ends meet and which are more likely to live in dwellings which are less energy efficient, and for whom running and living costs represent a greater share of their budget.

To give a scale of the potential benefit, especially for the less affluent population, of improving the energy efficiency of a home, a look at the average housing cost can be beneficial.

Across Europe, among the population earning less than 60% of the median national income, housing costs account for around 40% with peaks of around 60% in Greece and Germany. As such it often represents the most onerous element of expenditure in a household budget. 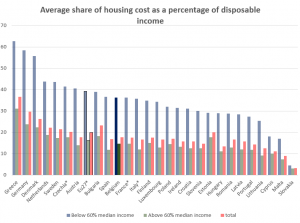 Moreover, around 7% of the European population (18% when considering those earning less than 60% of the median national income) face the so-called “Eat or Heat” Dilemma, meaning they may be unable to keep their home adequately warm. Luckily, this figure has been constantly decreasing since 2012 when it stood at nearly 11% (25% of the less affluent population).

However, especially for this part of the population, an improvement in the energetic performance of their dwelling has the double benefit to live both in an adequately warm home and have more resources at their disposition to tend to other necessities such as food, clothing and education. 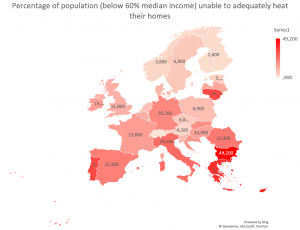 Energy efficient renovations can reduce a property’s energy running costs by up to 50%. This is particularly relevant in a working-from-home context where energy costs are likely to be somewhat elevated. The implied improvement in disposable income that this saving in energy costs should bring about is material and means there is a very important social connotation, especially for low-income households as, all things being equal, mortgage payments stand to become more affordable.

Given the importance of housing in reducing greenhouse gas emissions, the EMF-ECBC believes that it had a responsibility to take action and help coordinate around 2,000 European banks to move in same direction.

We wanted to give banks the right instruments to, not only stimulate energy efficient mortgage production, but assist them right through the value chain, to the point where green portfolios are funded in the capital markets. In this way we aimed to meet the needs of consumers, issuers and investors — by building an entire ecosystem that works for all participants.

Underlying this ethos is the basic need for transparency. We built on the basic concept of the Covered Bond Label to produce a green label that would help provide the appropriate information. Alongside our pioneering work on the Energy Efficient Mortgages Initiative (EEMI), which began in 2015, we developed the Energy Efficient Mortgage (EEM) Label. The EEM Label provides access to relevant, timely and transparent information on banks’ green loan portfolios through the Harmonised Disclosure Template (HDT).

The EEM Label, which was launched in February 2021, is designed to keep pace with legal and market best practices, and is a global reference for banks and institutional investors. The EEM Label allows easier access to energy efficiency financing, green bond markets and better tracking of EEM performance.

Furthermore, the EEM Label provides greater transparency in relation to climate risks, portfolio resilience and fights greenwashing. It also represents the first time a transnational effort has been made to produce comparable data through a harmonised template. Currently, this is available for 31 financial institutions from 13 different jurisdictions, covering 39 labelled Energy Efficient Mortgage products.

It’s becoming increasingly clear that the regulatory policy framework for green and ESG mortgages is set to become more comprehensive, which should ultimately boost eligible collateral and potentially lead to an improvement in regulatory treatment.

In April of this year the market for green mortgages got another shot in the arm after the European Commission published its EU Taxonomy Climate Delegated Act. The Commission took the advice of its Technical Expert Group and opted to make the top 15% most energy efficient houses within a country eligible for the Taxonomy, which, much to the Industry’s relief, was in line with current best practices.

The EEM Label represents a bridge to help banks meet the EC’s Taxonomy standard, supporting the development of Environmental, Social and Governance (ESG) markets across Europe, enabling investors to do their due diligence.

Related to this, the EMF-ECBC has put together a legal team to provide expert guidance to support banks facing potential challenges related to the labelling of energy efficient mortgages, whilst adhering to General Data Protection Regulation.

The European Commission also launched its Renovation Wave Strategy for improving the energy performance of buildings in October 2020. The purpose of this strategy is to at least double the rate of housing renovation by 2030.

The renovation of the existing housing stock could be at the centre of a growth strategy, leveraging financial markets, such as covered bonds and RMBS, but also green consumer loans and even green deposit accounts.

The majority of green covered bonds have funded green commercial and residential building developments, particularly new ones. However, most people live in older buildings, and it is within this kind of housing where some of the biggest gains are expected to be made in reducing the EU’s carbon footprint. This situation with the latest data at hand seems also to be the reality in the years to come as the building permits granted in Europe in aggregate terms account for roughly 0.9% of the total housing stock, meaning that at the current rate it would take over a century to renew the entire building stock in Europe. 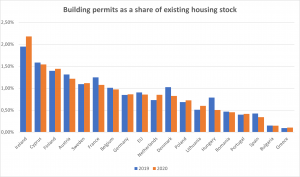 The EMF-ECBC has been instrumental in helping to promote refurbishment, instead of new buildings, as a dimension to the green mortgage market. As part of this we helped design the mechanism that financed improvements in three historically important buildings across Europe. The three projects aim to set a new standard that empirically demonstrates and promotes the concept that there are immense gains to be made from renovating the existing building stock.

There are estimated to be something in the region of 220m dwellings in Europe that will, on average, require energy efficient investments of €25,000-€30,000. This illustrates the huge amount of finance that will be needed and the enormous impact this could have on economic recovery.

In Europe, less than 20% of existing dwellings were built after the fall of the Berlin Wall (1989), which roughly matches the amount of dwellings built before 1945. In some countries, including Belgium, the housing stock is particularly old, which makes it both harder to tear down for monumental protection reasons, but also makes it even more important to foster the renovation of existing buildings. 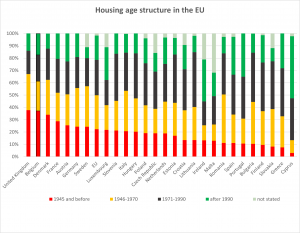 Looking at the potential for green covered bond issuance, we see important developments.

At €30bn outstanding, the green covered bond market is still a relatively niche product, but it’s growing quickly and is increasingly becoming a focal point in any investor meeting. Issuers can no longer realistically go into a meeting with investors without expecting to discuss their ESG strategy. Mortgages invariably make up the largest component of assets on banks’ balance sheets and de facto, green financing via covered bonds or RMBS has to be a part of that discussion.

It’s nice to see all the work we’ve been doing at the EMF-ECBC in these areas starting to bear fruit. We’re still actively engaged in making the case for reinforcing preferential regulatory treatment for ESG and energy efficient mortgages, and we’re at the beginning of a long journey. With the help and support of the market, we believe that we’re in a strong position to make further critical progress.