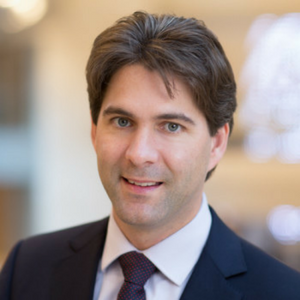 The ECBC Statistics and Data Working Group has been collecting statistics on the outstanding volume and an­nual gross supply of covered bonds since 2003. The aim is to provide a complete and consistent set of numbers that can serve as a reliable source of data for interested parties, ranging from issuers to investors and regula­tors. The past eight years, Florian Eichert was responsible for the data collection, which justifies a big thank you.

The collection of statistics is a significant undertaking each year, which is only possible thanks to the coopera­tion of the Working Group members, in close cooperation with covered bond issuers and banking associations. One representative per country (the list of country representatives can be found in the list of author section at the beginning of the Fact Book) undertakes the initial data collection by approaching each issuer separately in most countries. These figures are then cross checked on the basis of publicly available data by a small number of Working Group members. The 2019 numbers were cross checked by Florian Eichert and Nofal Shezad from Crédit Agricole, Agustin Martin from BBVA, Karsten Rühlmann from LBBW, Maureen Schuller from ING, as well as myself. A special thanks also goes to Daniele Westig of the ECBC for all his support during the exercise.

GENERAL REMARKS ON THE 2019 STATISTICS

The aim of the ECBC statistics is to provide the most reliable data on the size and issuance of covered bonds globally. As such, it paints as realistic a picture of developments and trends in the covered bond market. In 2016, a breakdown by maturity structures was added to the statistics, while this year, we started to collect statistics on sustainable covered bonds, reflecting their rising importance. Having said that, we will not publish this data yet on a country-by-country level, but rather provide a comprehensive overview in this article. Besides including data on sustainable covered bonds, the methodology was kept unchanged for the 2019 data exercise.

As always, we continue to try to improve the quality of the data even for previous years. It is always possible that we miss a bond or still include a bond that has been repaid early (just think of retained covered bonds). Wherever we realize that there was a mistake in last year’s data we amend the numbers. As a result of this, there could be some slight differences between this year’s numbers and those published in previous years.

Before going into the actual statistics, please find below some general remarks about the figures, which should help to interpret them correctly:

> Covered bonds are divided into those denominated in euro, those in domestic currency (if not the euro), and those in a currency other than the euro and the domestic currency. The tables are all in euro, with the end-of-year exchange rates published by the European Central Bank used to convert all non-euro denominated figures into euro for the respective year. This adds an exchange rate component to the volumes of non-euro covered bond markets. However, the aim is to show volumes that allow a potential investor to get a feel for the relative size of the various countries rather than the funding volumes ob­tained by issuers, which typically are swapped back into their domestic currency at issuance.

> Another breakdown is the public placement of covered bonds, which splits the bonds by their size (EUR1bn and above, EUR500m – below 1bn, below EUR 500m). This is to provide a feeling for how large liquid benchmark markets are relative to the overall market size. For non-euro issuance we have introduced waivers, as for example USD500m is a benchmark size in USD markets but when converting it to EUR would fall into the EUR<500m bucket. The amounts relevant for the three buckets are as follows.

> Spain: Spain’s covered bond statistics are based on the data provided by Spain’s AIAF (Asociación de Intermediarios de Activos Financieros). We have complemented this with registered unlisted covered bonds from the ECBC Covered Bond Label Database. The breakdown into public and private placements as well as the breakdown into fix and floating coupons in Spain is entirely based on non-AIAF sources.

Before turning to the results of the exercise, we like to highlight the relation between the fact book statistics and those published by the ECBC Covered Bond Label. The Label has become a widely used tool with 115 is­suers disclosing information on 140 cover pools across 21 countries by 30 September 2020 and covers EUR 2tn of covered bonds, i.e. over 70% of the total outstanding market. When comparing the Covered Bonds listed in the Label statistics to those presented in the Fact Book there might be some discrepancies, especially regarding public-private classification in Denmark and Sweden.

The reason for these discrepancies is the different market structure those two countries have where bonds are frequently tapped, repurchased and then tapped again. The Label as well as the ECBC statistics definitions requires a bond to be listed as well as syndicated to be classified as public. Although Danish and Swedish covered bonds are listed, the way they are issued does not comply with the syndication requirement. In the ECBC statistics presented below we try to capture the ”liquid” part of the market with our classifications and in justified cases can be more flexible than the Covered Bond Label database. We have therefore tried to elimi­nate the differences between both data sets wherever possible. But we have granted Denmark and Sweden an exception and consider bonds that for the ECBC label database are classified as private as public as long as we are talking about liquid benchmarks by these two countries’ standards.

The outstanding amount of covered bonds continued its positive trend in 2019. The market grew by 5.0% in 2019, following 4.7% growth in 2018. In fact, the EUR 2.7tn of outstanding covered bonds is the highest since 2012, and the second-highest ever. As such, covered bonds confirmed their role as a very important funding tool for banks across the globe.

A breakdown by country shows that only six out of the 32 countries saw a decline in the outstanding amount of covered bonds. This number was still lower than the average of 10 shrinking markets in the past ten years. The regional split also revealed the ongoing globalisation of covered bonds, as the share of outstanding covered bonds issued outside Europe increased to 7.7%, a 12bp increase compared to last year. Overall, Europe has a 92.3% share in the outstanding volumes, Asia/Pacific 3.5% and the Americas 4.3% (due to rounding the total is 100.1). In terms of annual growth, the figures are 4.9%, 6.3%, and 7%, respectively.

Zooming in on specific countries shows that the German market, which grew last year for the first time since the series began, shrank again last year (-1.5%), with a drop in outstanding public sector covered bonds being

the main reason, as outstanding mortgage Pfandbriefe actually increased. Furthermore, there were 15 countries that grew by more than 5% in 2019, with Denmark, France, the Netherlands, Sweden and the UK markets growing with more than EUR 10bn each. Finally, 16 countries had the highest outstanding amounts at the end of 2019 since the start of the series ion 2003.

The top three country rank by size did not change in 2019, with Denmark (EUR 419bn) still taking the top spot, followed by Germany (EUR 364bn) and France (EUR 334bn). However, there were some changes within the top ten. Switzerland and Norway changed position, with Switzerland now ranking 7th and Norway 8th. Meanwhile, the Netherlands entered the top ten at place 9, gaining two spots compared to 2018. It pushed Canada from 9th to 10th place, while the UK dropped out of the top ten. Meanwhile, South Korea achieved the biggest improvement by moving up three ranks to 24th place.

Turning to the breakdown by public and private placements shows that 29% of outstanding covered bonds was privately placed. The majority is publicly placed, with the market of benchmark bonds above EUR 500mn growing by EUR 91bn in absolute terms. Half of the increase stemmed from benchmark bonds with a size between EUR 500 and below EUR 1bn, with the other half being benchmark bonds with a size of EUR 1bn and above. However, the percentage growth was largest in the bucket EUR 500mn – below EUR 1bn, continuing the trend seen in recent years.

A breakdown by other categories showed that , private placement market saw less issuance in 2019 compared to 2018, with public placements rising strongly. Interesting to note is that covered bonds with benchmark size of EUR 1bn of more posted a very strong increase of EUR 53bn. This was mainly due to Denmark, where issu­ance picked up the most (see below), strengthening its position as largest covered bond market. Most Danish covered bonds fall in the EUR 1bn and above category. Meanwhile, Danish covered bond issuance was mainly in its domestic currency, lifting this category as well. In fact, issuance of euro-denominated covered bonds declined by 6% in 2019, with the share of domestic and euro currency issuance roughly equal. The EUR 15bn drop in EUR issuance was largely due to less issuance from Italy. Finally, issuance of fixed coupon covered bonds increased by EUR 73bn last year, whereas that of floating coupons and other coupon types declined.

As said, Denmark was again the country leading the new issue table. Its issuance volume also posted the strongest grow (+EUR 54bn). Germany took the second place with EUR 55bn of issuance (+5bn versus 2018), while Sweden moved from second to the third place (EUR 53bn), closely followed by France (EUR 49bn), which saw annual issuance volumes rise by EUR 11bn (second after Denmark). At the other side of the side of the spectrum, we find Italy, of which new supply dropped by EUR 18bn compared to 2018. The country dropped to the sixth place, still having issued EUR 27bn.

Maturity structures have been high on the covered bond agenda for years, which was also the reason to add the maturity breakdown the statistics in 2016. The discussion on maturity structures, and the extension triggers more specifically, is a hot topic surrounding the implementation of the new EU covered bond legislation in national laws. Furthermore, the ECB has excluded conditional pass-through covered bonds from its purchase programmes. 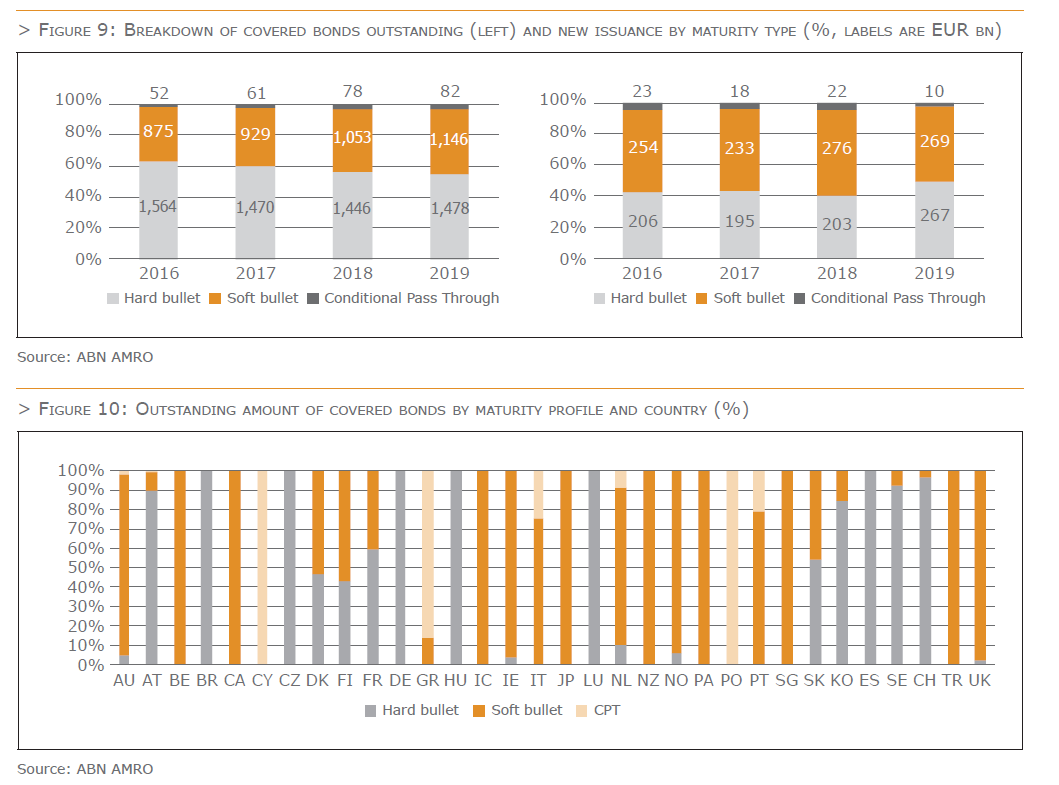 This year, new issuance of covered bonds have slowed down compared to previous years, following the outbreak of the Covid-19 pandemic as well as central bank policy measures taken to stem the damage from the crisis. New issuance of euro benchmark covered bonds started 2020 at a solid footing, although issuance volumes were already lower in the first quarter than in 2019. The outbreak of the pandemic lowered issuance volumes even more. Having said that, covered bonds also proved their crisis-proof nature, providing funding to banks during the crisis, as this was hardly possible for riskier ranks of bank debt. Meanwhile, the GBP as well as the USD covered bond markets also made healthy starts to the year.

Issuance of euro benchmarks has dropped by almost 30% so far this year, which is largely due to central banks that have offered very attractive funding for banks in their response to the crisis. The ECB made, for instance, the terms of the TLTRO-3 even more attractive, resulting a very large take-up in the June operation. This was already signalled by the fact that retained issuance of covered bonds rose strongly during this year (which will be interesting to watch in the 2020 statistics exercise). Overall, the TLTRO-3 operation has clearly reduced 2020 covered bond supply, while large deposit inflows also have lowered bank funding needs. New issuance has picked up somewhat after a very quiet summer period, but it is unlikely to reach volumes seen in the past two years.

On a positive note, we have seen more issuance of sustainable euro benchmark covered bonds year-to-date than during 2019 as whole. The year has also welcomed the first covered bond of which the proceeds will be used to finance public loans related to Covid-19. As such, this market is set to grow further.