On the 1st of January 2016 the new Polish Law on Covered Bonds and Mortgage Banks entered into force. This represents a fundamental change of the legal framework for mortgage banks and covered bonds.

In the period between 1997-2015, the business of Polish mortgage banks and covered bond issuances had not developed as originally expected due to a number of factors such as cheap funding from parent banks abroad for mortgage lending, internal competition between universal and mortgage banks, and – last but not least – constraints resulting from existing laws. Hence, the new law creates a unique window of opportunity for the dynamic expansion of the covered bond market. The amended law will substantially improve the covered bond market in Poland in at least three major areas:

The credibility and safety of Polish covered bonds is improved mainly through the introduction of the  conditional pass-through structure. The changes implemented to the Polish regulations are in line with  the best market practices and with recommendations  of the European Central Bank (ECB) and credit rating  agencies. According to the new regulations, upon  declaration of a mortgage bank’s insolvency, the  maturity of the bank’s obligations as an issuer of covered bonds is extended immediately by 12 months and the Asset Coverage Test and Liquidity Tests are applicable to determine repayment of interest and principal. Should the bank fail either of the tests, repayments will switch to a pass-through structure whereby the maturity of all bonds will be extended to the longest dated asset plus three years. Such a solution substantially reduces repayment risk to investors.

Other changes introduce a minimum legal overcollateralisation requirement at the level of 10% and a mandatory liquidity reserve funded by mortgage banks using cash or eligible securities covering at least six months of interest due on the covered bonds outstanding.

The new law, which was widely discussed with the banking sector, the Polish Financial Supervision Authority and rating agencies during the legislation process, is a very robust basis for the stable development of the Polish covered bond market. All these elements increase the safety, soundness and the quality of the Polish covered bond market as they increase the potential to reach the rating at the level of the country ceiling (Aa3 for Poland in the case of Moody’s).

Poland is the largest country in Central Europe, with a population close to 39 million, and one of the biggest Member States of European Union. It has over 13.8 million dwellings spread across the country. Many of them are financed by mortgage loans, the outstanding level reaches almost PLN 400 bn. (EUR 93 bn.), of which c. 60% is denominated in PLN. However, there are still high housing needs and they are financed in a large part by mortgage loans. The housing deficit, as reflected in dwellings per 1,000 inhabitants, is 446 per 1,000 in Poland, while other countries such as Germany or the Czech Republic operate at the c. 550-600 level (based on 2014 data). The volume of mortgage loans in Poland has been steadily growing over the last 25 years but in relation to GDP it is still far behind EU average (20% vs. 50%). 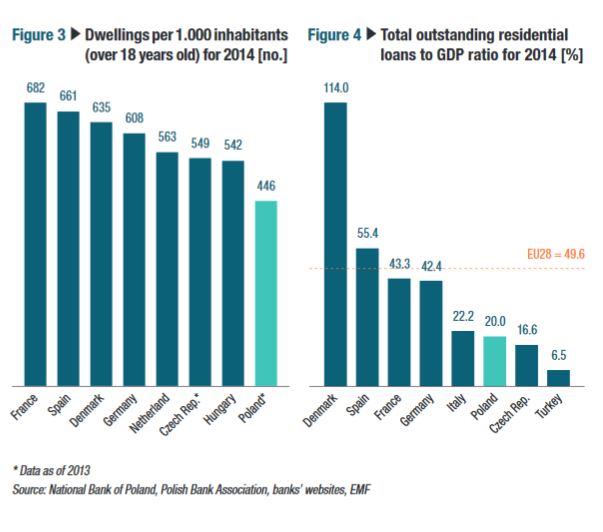 The new legal framework, steady and dynamic development of residential mortgage loan volumes by continuous new sales based on PLN denominated loans, creates high potential for Polish covered bonds and a unique opportunity both for issuers and investors. Banking groups, especially those having subsidiary mortgage banks, can leverage these synergies by transferring portfolios from universal to mortgage banks and directing at least part of  their new sales to mortgage banks and finance  them by issuance of covered bonds.

Another important factor stimulating the covered bond market are the limitations on funding from  international mother companies and the increasing need of Polish banks to find a new, long-term and stable source of financing, including meeting new funding requirements such as the Net Stable Funding Requirement (NSFR).

This is only the beginning of the story. There have already been a few issues of covered bonds in 2016 under the new law, but these have been predominantly allocated to domestic investors. However, the Polish jurisdiction can now significantly increase the supply of covered bonds by offering it also to international investors. 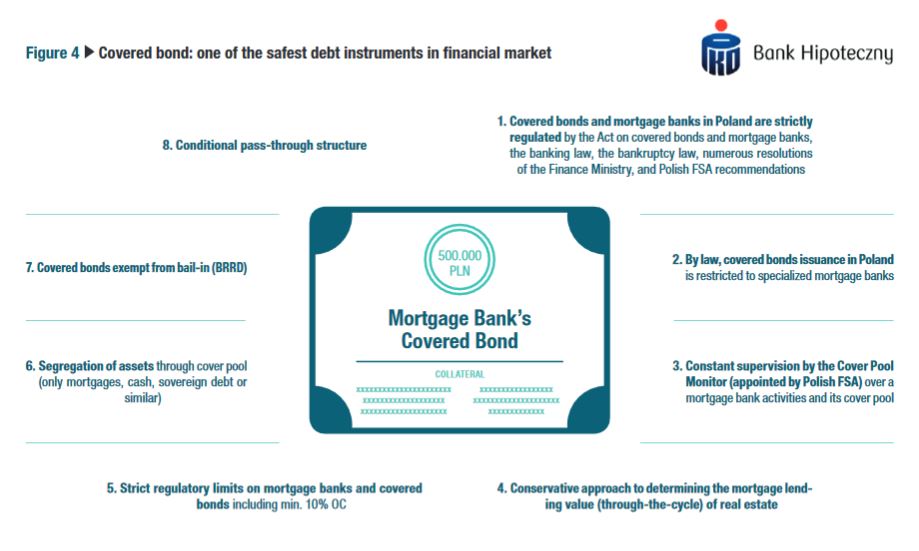 PKO BP, the biggest Polish credit institution, established PKO Mortgage Bank (PKO Bank Hipoteczny), which began its operational activity in April 2015. PKO Group has the leading position in residential mortgages having a c. 25% share in outstanding volume and new sales. Its current portfolio includes c. PLN 60 bn. (EUR 14 bn.) of residential mortgages denominated in PLN. Part of this portfolio is being transferred from PKO Bank Polski to PKO Bank Hipoteczny and together with new sales directed to PKO Bank Hipoteczny, they will be financed by covered bonds.