The European Covered Bond Fact Book 2019, coinciding with the 250th anniversary of the asset class, is now available

Precisely 250 years ago today, on 29 August 1769 in Wrocław (Breslau), Frederick II signed a cabinet order introducing a new financial instrument, which would become the forerunner to the modern covered bond frameworks we know today. In the same way as the Pfandbrief enabled Prussia to restore its country’s finances, the modern covered bond has guaranteed access to capital markets in stressed and distressed market conditions – both historically and more recently – and has cemented its role as a fundamental cog in the mechanism enabling cost-efficient lending to the real economy in good times and bad. 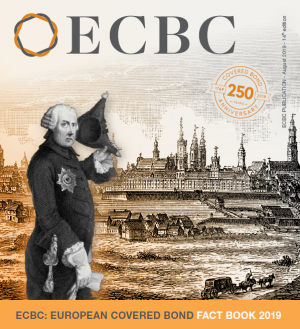 The modern era of the covered bond product is still rooted in the same Zeitgeist as Frederick II who viewed the solidity of the financial sector as the key driver of innovation and economic growth. In this anniversary year, the European Covered Bond Council (ECBC) is delighted to announce the publication of the 14th (2019) edition of its European Covered Bond Fact Book, which builds upon the success of previous editions and confirms its place as the definitive source of information in terms of market, regulatory and legislative developments and statistical data on the covered bond asset class.

With nearly EUR 2.6 tn outstanding at the end of 2018, covered bonds play a key role in European capital markets, contributing to the efficient allocation of capital and, ultimately, to economic development and recovery. The EUR 500 bn of issuance during 2018 evidences the ability of the asset class to provide essential access to long-term capital market funding. Covered bonds’ consistently strong performance and quality features attract the attention of regulators and market participants worldwide, which, in turn, leads to an increasing recognition of the macro-prudential value of the asset class.

With regard to the covered bond market statistics for 2018, the ECBC is pleased to announce that they are now available on the ECBC website here. The ECBC data covers market developments over the past 15 years for 32 different countries.

For the first time since 2012, the ECBC statistics have evidenced a market growth of both outstanding volumes which increased on a yearly basis by 4.7% reaching EUR 2.577 tn and also of new issuances which passed the EUR 500 bn threshold marking a 12.2% increase, the highest value since 2015. The principal underlying asset remains mortgages which with respect to 2017 has expanded its market share by 1.3 percentage points to 88.3%, followed by public sector at 11.4%.

In 2018 non-EEA countries with an active covered bond market were Australia, Canada, New Zealand, Singapore, South Korea and Switzerland, together with Brazil and Japan both of which joined 2018 while Panama returned to the market after a year of no activity. These countries spread around the globe accounted for 12.3%  of the total outstanding, reaching the same all-time-high market share as in 2016

The European Covered Bond Fact Book 2018, featuring the covered bond statistical data, can be downloaded on the ECBC website here. The hard copy of the Fact Book will be presented and made available at the ECBC Plenary Meeting in Munich on 11 September 2019.

The ECBC welcomes the broad range of views expressed in this revision of the Fact Book and thanks all contributors whose enthusiasm and dedication have once again produced an outstanding publication, especially the Chairmen of the ECBC Fact Book and Statistics & Data Working Groups, Mr Sascha Kullig and Mr Florian Eichert, respectively.

“On the one hand, the 14th edition of the Fact Book (2019) looks back to the fascinating events of the past related to this asset class and celebrates the 250th anniversary of the creation of the Pfandbrief, whilst on the other hand it considers new market perspectives at European and global level in light of the finalisation of European legislation on Covered Bonds. This publication once again constitutes a key element, alongside the Covered Bond Label launched in 2012, of the continuous transparency efforts of the covered bond community. In our role as a market think tank, we remain committed to providing a comprehensive picture of the market and drawing readers’ attention to key drivers of evolution in the market. In order to meet the growing demand from market participants for high-quality information, this edition also includes chapters from Estonia, Latvia and Lithuania discussing the new Pan Baltic Covered Bond Framework, as well as commentary on developments outside the EU, for example in Brazil and Japan.”