What Next For New Covered Bond Markets?

(This article is a summary of a recent S&P Global Ratings report. To read the full report, please click here.)

Outstanding covered bonds grew by 13% in the decade prior to the COVID-19 crisis, although there were significant geographical differences. Volumes declined by 9% in the Eurozone while increasing almost five times outside established markets, such as in Central and Eastern Europe and Asia-Pacific.

The covered bond market remained open throughout 2020, despite extended coronavirus containment measures that pushed the world into the deepest recession since the Great Depression, but new issuance volumes contracted significantly (see the full report here.)

The question is whether growth in new covered bond markets will return to its pre-crisis trend once COVID-19 has been effectively contained.

A surge in bank deposits and cheap central bank funding combined to trim 2020 issuance. Generous fiscal support measures, along with lockdowns which limited households’ opportunities to spend, contributed to the increase in savings.

We expect that the eventual relaxation of social distancing measures will support a global rebound in economic growth starting from the second half of this year. World GDP should increase by 5.5% in 2021, in our view, after contracting by 3.5% in 2020, with the fastest expansion in emerging markets and in the U.S. 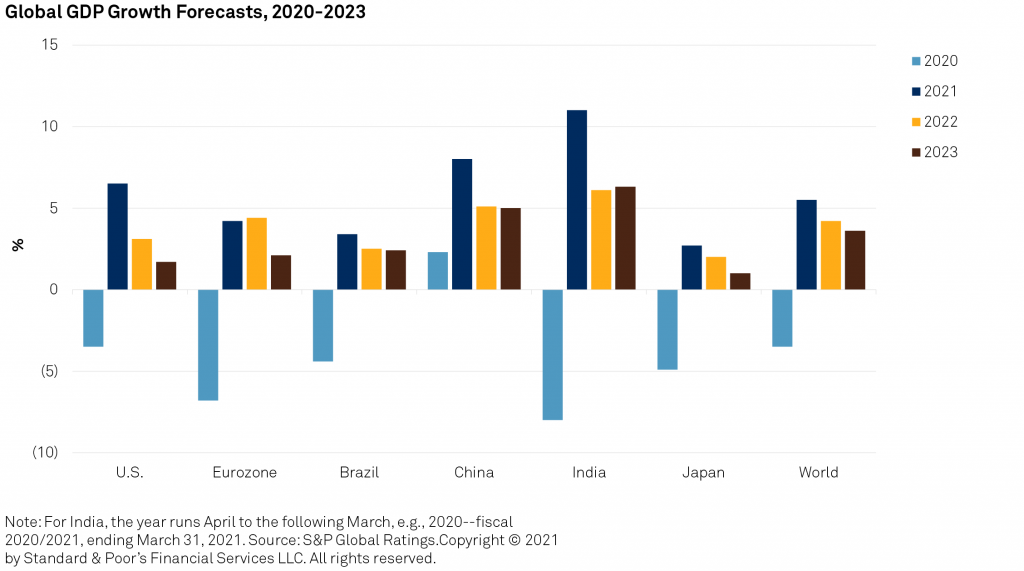 Households will spend at least part of the excess savings they accumulated during lockdowns, helping the economic recovery but also clipping the growth in customer deposits. At the same time an improving economic outlook will support asset formation, which should rebound from next year, once nonperforming assets start declining. We anticipate that the ratio of deposits to domestic loans will decrease in most of the major economies, beginning in 2022. When mortgage lending grows faster than customer deposits, lenders typically access the wholesale funding market and can use mortgage loans as collateral for issuing covered bonds. 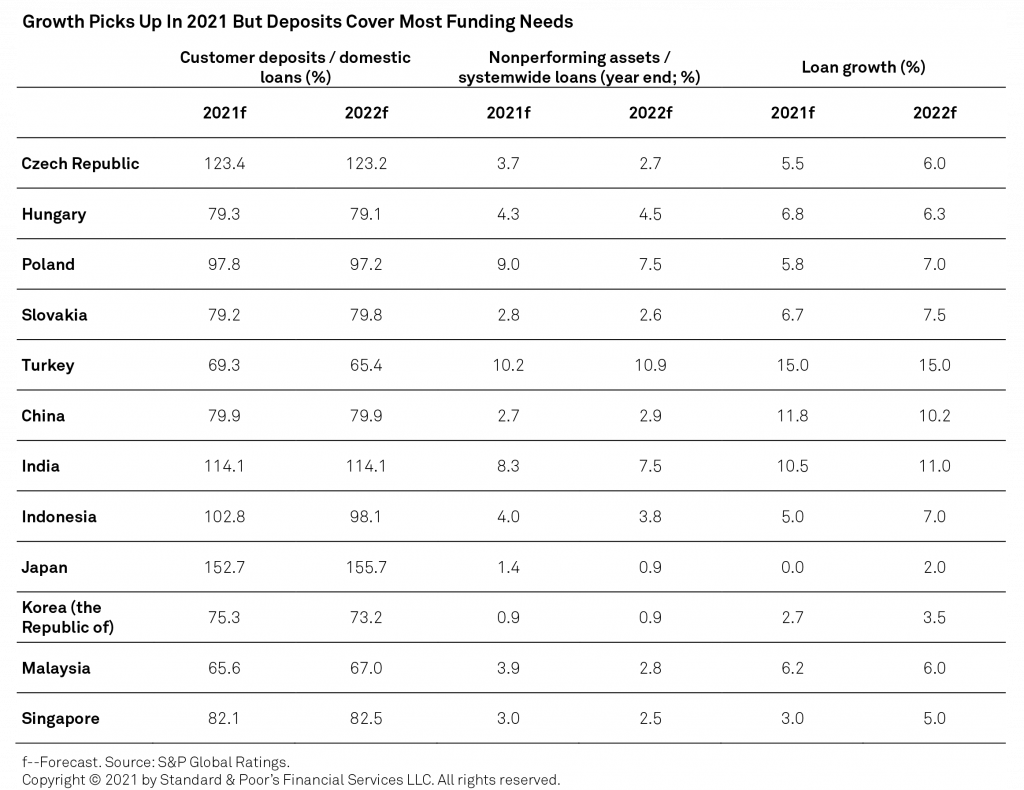 While we anticipate that ample liquidity will still depress 2021 covered bond issuance in new markets, we are cautiously optimistic that it will pick up again once the economic recovery is well established. Robust asset growth and favorable financing conditions should lure back existing issuers who did not require additional wholesale funding during the pandemic.

In the medium term, we expect further growth as new issuers and new jurisdictions come to the fore. Two factors matter the most: a robust legal or regulatory framework to enable issuance and a convincing business case to encourage it.

European Union member states are in the process of transposing the harmonized covered bond framework into their national legislations. The legislative package provides a common definition of covered bonds, defines the product’s structural features, and clarifies the supervisory responsibilities. It also amends the EU’s Capital Requirements Regulation to strengthen the conditions for granting preferential capital treatment. The transposition of the EU harmonization directive should prove a supporting factor for covered bond issuance in Central and Eastern Europe, by either aligning existing local frameworks to international best practices or by introducing new dedicated legislation. While it is not clear whether all member states will be able to meet the July 2021 transposition target date, issuers in countries such as Bulgaria, the Baltics or Croatia will likely be able to issue covered bonds soon.

Are there sufficient incentives to issue covered bonds in a region where most bank assets are funded with deposits?

According to the European Mortgage Federation, mortgages as percentage of GDP in Central and Eastern Europe are well below the EU average of 44.1% (see chart). However, recent demand for housing has been stronger in this region than in other EU member states, driven by falling unemployment, rapidly rising incomes, and a shortage of dwellings. This resulted in a solid increase in mortgage lending, which issuers so far have largely funded with deposits. In a few countries, banks had also relied on support from parent foreign banks to meet their funding needs. However, following changes in banks’ ownership and regulatory initiatives in recent years, banks have become increasingly self-financed. In this context, covered bonds can be a critical tool to better match issuers’ funding profiles, diversify their investor base, and optimize their cost of borrowing. 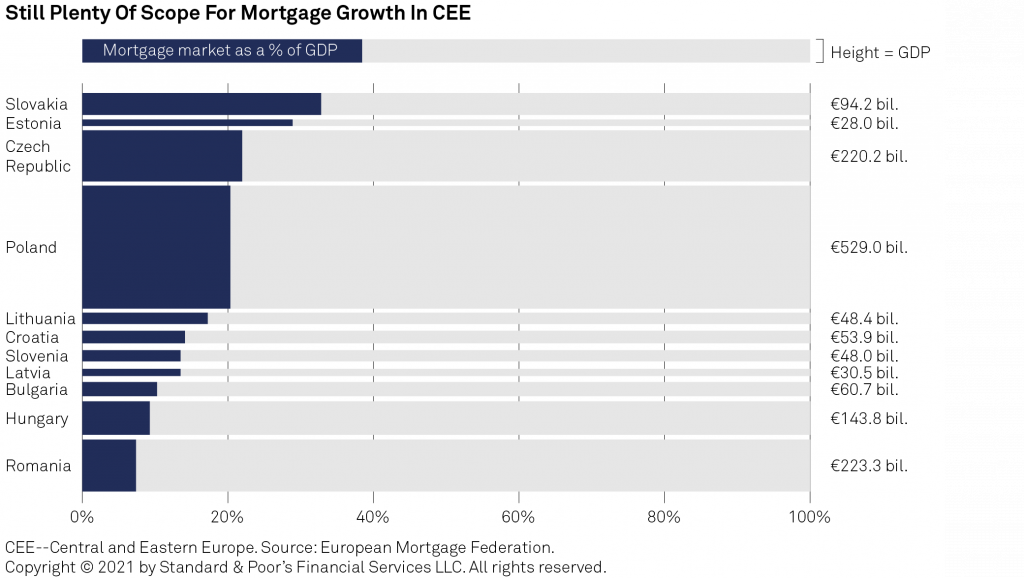 The transposition of the harmonization directive could spur legislative initiatives even outside the EU, since it establishes a blueprint for covered bond legal frameworks that will be considered by legislators globally. A stricter alignment with the provisions of the directive could also favor the achievement of an equivalent regulatory treatment of covered bonds issued by credit institutions located outside the European Economic Area.

Korea and Singapore pioneered covered bond issuance in developed Asia. More recently, the first covered bond program was set up in Japan. Because there is no dedicated local covered bond legislation, the program was based on a contractual structure.

Banks in developed Asia are primarily funded by customer deposits, and they use covered bonds mainly as a tool to manage asset liability mismatch risk and diversify their funding sources.

Since the potential for asset growth in these countries is limited, we expect that further issuance may come principally through regulatory initiatives. The Monetary Authority of Singapore for example has recently increased the asset encumbrance limit to 10% of the issuer’s total assets from 4%. This could lead to an increase in existing programs’ size and might incentivize other banks to set up covered bond programs. Similarly, the establishment of a regulatory framework in Japan could encourage new issuers, including regional banks.

In emerging Asia demand for housing should grow substantially in the coming decades. The Brookings Institution forecasts that the share of middle-class purchasing power–as defined by individuals who have an income between $10 and $100 a day–will increase by 2030 to 22% of the global total in China, and to 17% in India, while decreasing to 20% in Europe and 10% in North America. A burgeoning middle class and a shortage of good quality housing should stimulate the expansion of mortgage financing, and household debt should converge toward the levels reached in developed economies. 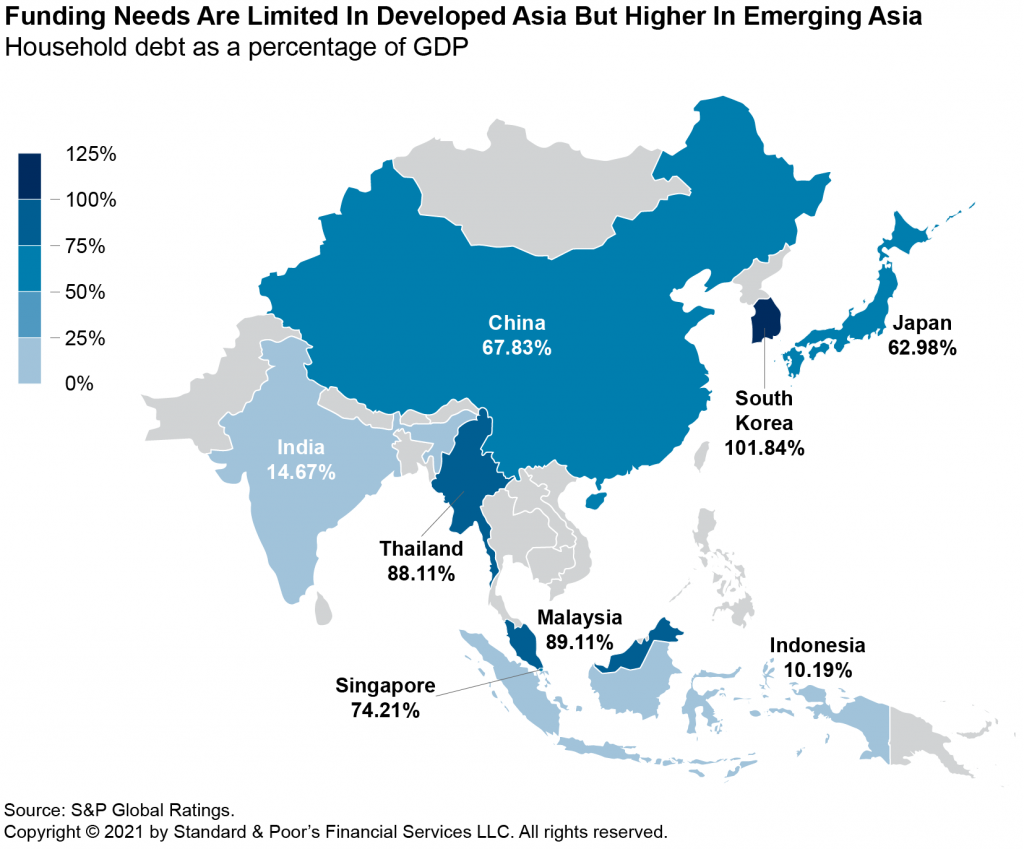 Covered bonds could become an important instrument for mobilizing private capital toward mortgage financing in the region. We understand that regulators in China and India, among others, have recently been considering the product. Despite the success of the first Japanese issuances, we don’t believe that many financial institutions outside this country will establish programs based entirely on a contractual framework. Most new issuers will either wait for the approval of a dedicated covered bond legal framework, or at least an appropriate supportive regulatory framework, in our view.

A lack of dedicated legal frameworks is also preventing Latin American financial institutions from issuing covered bonds. However, things may change thanks to legislative developments in Brazil. At the end of 2018, Brazilian financial institutions started issuing privately placed local covered bonds (“letra imobiliária garantida” or LIGs), after the approval of a dedicated legal framework. Last year, the Brazilian Securities Exchange Commission allowed public placements for LIGs, which could further support domestic issuance. The market is still waiting for clarification on how international issuances could be achieved. Once this clarification is obtained, we believe that Brazilian banks will try to issue offshore LIGs targeting foreign investors. If covered bonds prove successful in Brazil, we may see other countries in the region follow its example.

And this leads us to consider the two main risks which could hinder covered bond issuance in new markets.

First, the legislative process could take longer than expected, and even ultimately prove unsuccessful. Morocco was the first country in Africa to release draft covered bond legislation in 2013. However, it has not yet approved the final law, which is a testament to the difficulties in approving a new framework. Even countries that approve a dedicated framework, such as Brazil, may find that market conditions have deteriorated since the beginning of the process.

The second risk is that financial institutions may not find it economical or possible to issue in times of high market volatility if, for example, they are unable to find swap providers or enough investors. While in more established markets financial institutions have been able to issue covered bonds even at times of market turmoil, this is not a foregone conclusion for new market entrants, especially lower down the rating scale. Turkey aligned its framework to international standards at the end of 2014, but market volatility and political uncertainty have severely limited international issuance. That points to the benefit of setting up a program in times of favorable market conditions and establishing a local investor base, when possible.

It has been said that there is nothing more powerful than an idea whose time has come. If authorities want to reduce housing deficits and help financial institutions diversify their funding tools, they should create the right conditions for covered bonds to establish a foothold in new markets. With the appropriate legal and regulatory frameworks, the right incentives, and sufficient transparency, these markets could thrive.